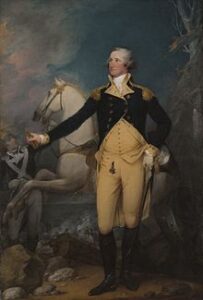 When our first president was sixteen, he hand-copied 110 Rules of Civility and Decent Behavior in Company and Conversation, a book of etiquette originally compiled by a group of French Jesuits. Though Washington is not known as the most intellectually gifted of the Founding Fathers, he is remembered for his character, which he formed by serving others through his seemingly insignificant, everyday conduct.

It was through the diligent performance of mundane tasks that Washington learned what the ancient sages taught: character is formed by conduct.

The very first of the 110 Rules of Civility emphasizes that civil conduct involves a mindfulness of others in all circumstances—“Every action done in company ought to be with some sign of respect to those that are present”—and then explains the importance of not killing vermin like lice and flees (at least in the presence of others!) and the peril of spitting or picking your teeth at the dinner table.[1] These rules may seem hopelessly antiquarian, but they demonstrate an important truth that Washington understood: we owe, and are owed, a bare minimum of civility because of our inherent human dignity, and that respect for others in ways great and small is the stuff of character.

This first maxim of civility informed all the rest and guided Washington throughout his life. He strove to demonstrate respect to all he encountered and often made a good first impression—especially among the ladies. His presence so impressed the wife of his vice president, Abigail Adams, that she gushed to a friend after meeting him: “He is polite with dignity, affable without familiarity, distant without Haughtiness, Grave without Austerity, Modest, Wise & Good. These are traits in his Character which peculiarly fit him for the exalted station he holds.”

Even amid this sort of praise, and even as a young man, Washington’s conduct reflected an other-regarding humility.

For example, in 1754, when he was twenty-two years old and a colonel stationed in Alexandria, Washington argued with one William Payne over competing candidates for a Virginia Assembly seat. The argument became so passionate that Washington hurled an insult Payne’s way, prompting Payne to take a swing at Washington, knocking him to the ground. Washington’s men rose to avenge their leader, but he stopped them. He instead asked Payne to meet him at the local tavern the following day.

Payne arrived armed and prepared for a duel. He was surprised instead to see Washington seated with two wine glasses before him. Washington rose, greeted him with a smile, and extended his hand. “Mr. Payne, to err is nature; to rectify error is glory,” Washington said. “I believe I was wrong yesterday; you have already had some satisfaction, and if you deem that sufficient, here is my hand—let us be friends.”

Washington’s willingness to put aside his pride benefitted not only him but also his country. One crisp afternoon in February 1781, Washington summoned Alexander Hamilton, his aide-de-camp. On his way to meet Washington, Hamilton was met by the Marquis de Lafayette. After a brief exchange, Hamilton finally made his way to the general.

Washington fumed. “Colonel Hamilton, you have kept me waiting at the head of the stairs these ten minutes. I must tell you, sir, that you treat me with great disrespect!” Hamilton replied, “I am not conscious of it, sir, but since you have thought it necessary to tell me so, we part.” With that, Hamilton resigned.

Within the hour, Washington sent Hamilton a message apologizing for the outburst. They reconciled, and Washington in the end elevated the talented Hamilton to a post of active command at Yorktown. Washington knew that exercising true civility is to employ moderate words and actions for the sake of respecting the dignity of others.

Washington realized, too, that true civility must also be true to the literal sense of the word: conduct befitting membership in the civis—being a good citizen in a republic. This meant respecting the humanity and dignity of others with whom one might have deep differences. Moses Seixas, a member of the first Jewish congregation in Newport, wrote to Washington in advance of his trip to Rhode Island, thanking him and his government for “generously affording to all liberty of conscience, and immunities of citizenship: deeming every one, of whatever nation, tongue, or language, equal parts of the great governmental machine.”

Washington’s letter in response affirmed the U.S. government’s commitment to respecting the varying beliefs, backgrounds, and practices of all citizens: “For happily the Government of the United States gives to bigotry no sanction, to persecution no assistance, requires only that they who live under its protection should demean themselves as good citizens.”

These stories and examples show that Washington was a man with great inner strength and moral fortitude, which he built over a life of practicing respect for others. Washington’s interior life—the motives of his heart that drove his outer action—was not perfect, but we know that he strove to demonstrate respect for others despite differences, to acknowledge his own shortcomings, and, above all, to consider the good of others alongside his own. Such was the strength of Washington’s character, fortified by years of repetition—starting with his hand-copied etiquette rules.

Washington began practicing his humility, selflessness, and other-orientedness at an early age, cultivating a habit of mind and soul that culminated in his ultimate selfless act: refusing a royal crown for the sake of the republic for which he had fought.

Parson Weems, Washington’s first biographer, wrote of him, “No wonder every body honoured him who honoured every body.”

Alexandra Hudson is passionate about the way that ideas and storytelling can change people’s lives. A writer, bibliophile, and refugee from federal politics, she earned her MSc from the London School of Economics, currently lives in the American Midwest, and is writing a book on civility. Follow her on Twitter @LexiOHudson.