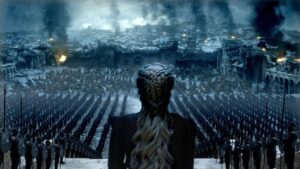 One cannot write about this show with any insight without also, however inadvertently, giving away some plot twists, which is to say: what you will read contains spoilers. So if you don’t want to know, or didn’t join the 20 million people who watched the final season and still want the element of surprise, you have been warned: stop reading now.

And yet the lessons you will gain from the most criticized of all the seasons could be the most important lesson you will ever encounter in politics — or maybe in life. Here is what this piece discusses.

“Everywhere she goes, evil men die, and we cheer her for it,” Tyrion Lannister explains to a confounded Jon Snow — both men still grappling with the gravity of Daenerys Targaryen’s slaughter of the citizens of King’s Landing in the penultimate episode of Game of Thrones.

“She grows more powerful, and more sure that she is good and right,” he continues. “She believes her destiny is to build a better world for everyone. If you believed that — if you truly believed it — wouldn’t you kill whoever stood between you and paradise?”

This is a provoking thought. It is an opportunity to reflect on the importance of means and methods in both politics and life, and the hazard of justifying horrors to achieve noble ends. It is an important reminder that justice at any cost is not justice at all.

“Of all tyrannies,” wrote C.S. Lewis, “a tyranny sincerely exercised for the good of its victims may be the most oppressive… those who torment us for our own good will torment us without end for they do so with the approval of their own conscience.”

The Dragon Queen Daenerys Targaryen, in many instances, was a liberator of the oppressed and a persecutor of oppressors. She murdered the slavers of Astapor, she crucified hundreds of Meereenese nobles, she burned alive the Dothraki Khals — all these were evil people, Tyrion reminds us, and we, the audience, could not help but celebrate their suffering as it was just dessert for the suffering they inflicted on innocents. This moral zeal nourished her. This uprightness confirmed her mission as liberator. It justified in her mind the slaughtering of countless innocents — so long as it is for the greater good.

“Do you think I’m the last man she’ll execute?” Tyrion asks Jon soberly. “That is her decision. She is the queen,” Jon offers meekly in reply.

Yet Jon knows Tyrion is right, and that Daenerys is on a path that will invariably lead to more bloodshed.

Jon confronts Daenerys in the following scene, angrily demanding to know why she would order the execution of prisoners of war after the war had been won.

“It was necessary,” Daenerys quietly replies. Jon continues to plead on behalf of the men, women, and children burned alive by Daenerys’ attack.

“[Cersei, the queen of King’s Landing and Daenerys’ enemy] tried to use their innocence against me. She thought it would cripple me,” Daenerys rationalizes.

Jon continues to plea on behalf of Tyrion, who faces execution for treason.

“We can’t hide behind small mercies,” Daenerys resolves. “The world we need won’t be built by men loyal to the world we have… It’s not easy to see something that’s never been before. A good world.”

“Because I know what is good,” Daenerys affirms.

“What about everyone else?” questions Jon earnestly. “All the other people who think they know what’s good?”

“They don’t get to choose,” states Daenerys flatly.

Moments later, in a consequential calculation of his own — choosing to kill the Dragon Queen in order to save millions of innocents in the future — Jon drives a dagger through Daenerys’ heart amidst a passionate kiss, killing her.

Friedrich Nietzsche wrote, “Whoever fights monsters should see… that in the process he does not become a monster. If you gaze long enough into an abyss, the abyss will gaze back into you.”

As Aleksandr Solzhenitsyn reminds us, the line between good and evil runs through the heart of every person — and a just cause is the most seductive nourishment of baser parts of our souls… of the abyss within.